Searching for Sugar Man and other Academy Award-nominated documentaries are available to borrow from the Lititz Public Library.

Hell and Back Again
Embedded with the U.S. Marine Echo Company in Afghanistan, a photojournalist and filmmaker reveals the devastating impact a Taliban machine-gun bullet had on the life of a twenty-five-year-old sergeant.

Restrepo: One Platoon, One Valley, One Year
A remote, fifteen-man outpost in Afghanistan named after a platoon medic who was killed in action is considered one of the most dangerous postings in the U.S. military.

Gasland
After his land was identified as a reservoir of natural gas, a filmmaker documented his cross-country trek to find out if the controversial process of hydraulic fracking is actually safe.

Inside Job
The unchecked rise of a rogue industry led to the 2008 financial crisis and caused millions of people to lose their jobs and homes in the worst recession since the Great Depression.

Man on Wire
Philippe Petit made a high-wire walk in 1974 between the World Trade Center’s Twin Towers in New York City, an event that is considered one history’s most artistic crimes.

Taxi to the Dark Side
The torture and killing of an innocent Afghani taxi driver highlights the abuses of government power and the erosion of civil rights. 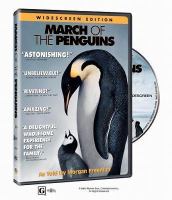 The March of the Penguins
Penguins journey through the Antarctic in search of true love.

Super Size Me
A filmmaker decides to find out if fast food is making American fat by building his personal menu around McDonald’s offerings and interviewing a host of experts to try and find out why so many Americans are overweight.

The Story of the Weeping Camel
A blend of narrative and documentary footage tells the story of a nomadic Mongolian family who use a music ritual to entice a camel to accept her newborn colt.

The Fog of War
Former Secretary of Defense Robert S. McNamara offers candid insights into the 1945 bombing of Tokyo, the Cuban Missile Crisis and the effects of the Vietnam War.

Murder on a Sunday Morning
When a fifteen-year-old black male is arrested for the murder of a young woman, everyone except is lawyer is ready to condemn him.

Sound and Fury
Issues arise in an extended family of several deaf members when the opportunity arises for two of the children to receive a surgical implant that would enable them to hear.

One Day in September
During the 1972 Olympics in Munich, a team of extreme Palestinian terrorists brutally massacred eleven Israeli athletes.

Originally published on May 24, 2013 in the Lititz Record Express.