Think of a school principal, and many images may come to mind. Perhaps you remember the strict disciplinarian whom you only appreciated years later. Perhaps it’s the friendly and smiling principal that greeted each child with a good morning wave. No matter the particular memory that we have, we can all agree that principals can have a lasting and meaningful effect on our lives. This May 1st let us celebrate school principals in all the ways they’ve played a role in our lives.

These selections have characters that are school principals: 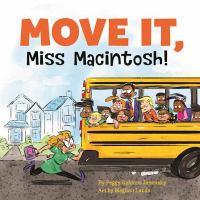 Move It, Miss Macintosh! by Peggy Robbins Janousky – Kids aren’t the only ones who get nervous on the first day of school! It’s the first day of school and Miss Macintosh is certain about one thing: she isn’t going! As she snuggles back under the covers, the doorbell rings. In comes Mr. Bellweather, the school principal who assures her that all kindergarten teachers have first-day jitters.

Froggy Builds a Snowman by Jonathan London – It’s Winter Carnival day, and Froggy can’t wait to build a snowman. But school principal Mr. Mugwort says there is a lot to do first. Skating! Sledding! A snow fort! Finally it’s time to build a snowman, but Froggy builds a snow dinosaur instead. And of course, the day wouldn’t be complete without a wild snowball fight.

The Candy Caper by Tom Watson – Molly gets things stuck in her head sometimes. When she sees a jar of candy on Principal Shelton’s desk, she absolutely needs to know how many candies are in that jar! Luckily, her two best friends, Simon and Rosie, are ready to help her find the answer–even if it means detention for all of them!

Principal Fred Won’t Go To Bed by Carolyn Crimi – After a long day at school, Principal Fred slips into his pajamas to get ready for bed. But something is missing–where is his bear? “I need Bear!” Fred yells as he races down the stairs. He zigs and he zags and he hops across chairs. Follow Principal Fred and his family as they dash and they crash and they search for the principal’s favorite stuffed animal.

Middle School
Help! I’m Trapped in My Principal’s Body by Todd Strasser – A bully is beating up students in Jake Sherman’s eighth-grade class and it looks as if no one can stop him, until Jake causes his buddy Josh to switch bodies with the principal.

A Time for Murder: A Novel by Jessica Fletcher & Jon Land – Jessica returns to high school for a colleague’s retirement party and has fun seeing familiar faces. That is, until the colleague winds up dead – and his death has mysterious links to Jessica’s very first murder case. With nothing but her own instincts to guide her, Jessica embarks on a quest to find out what really happened all those years ago and who s behind these murders. Because time is running out to catch this killer…

Lean On Me – A fact based story of high school principal Joe Clark, who armed himself with a bullhorn and a Louisville slugger and slammed the door on losers at Eastside High in Paterson, New Jersey.