Don’t drop the ball. Do an end run around the summer doldrums and find knockout reads that go the distance. Borrow a book about sports from the Lititz Public Library.

Those Guys Have All the Fun: Inside the World of ESPN by James Andrew Miller and Tom Shales
Nearly five hundred interviews with current and former announcers, analysts and sports stars contribute to this history of sports channel ESPN.

Driving Mr. Yogi: Yogi Berra, Ron Guidry and Baseball’s Greatest Gift by Harvey Araton
An account of the friendship between the Hall of Fame catcher and the Yankees pitcher, describing their annual reunions in Florida and offering insight into Berra’s role in mentoring younger players.

Tales from Q School : Inside Golf’s Fifth Major by John Feinstein
The PGA’s qualifying tournament, known as Q School, is the measuring ground for aspiring professional golfers who compete for thirty coveted positions.

Why a Curveball Curves: The Incredible Science of Sport edited by Frank Vizard
Find answers to fascinating questions about the physics of basketball, soccer, hockey, golf and several other sports. 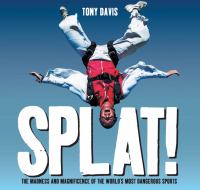 Splat!: The Madness and Magnificence of the World’s Most Dangerous Sports by Tony Davis
This guide presents amazing-but-true facts about daring, nontraditional sports, including a central Asian game of goat-nabbing and the seemingly suicidal human catapult.

Showdown at Shepherd’s Bush: The 1908 Olympic Marathon and the Three Runners Who Launched a Sporting Craze by David Davis
Set against the backdrop of the 1908 London Olympics, a race between runners from Italy, U.S. and Canada established the marathon as a major sporting event.

Dream Team: How Michael, Magic, Larry, Charles and the Greatest Team of All Time Conquered the World and Changed the Game of Basketball Forever by Jack McCallum
The roster of the 1992 U.S. team that won the Olympic basketball gold medal included Hall-of-Famers Larry Bird, Magic Johnson, Michael Jordan, Charles Barkley and Karl Malone.

The Victory Season: The End of World War II and the Birth of Baseball’s Golden Age by Robert Weintraub
The transition to peace-time seasons began a new age in baseball, one that emphasized personalities like Ted Williams, Jackie Robinson and Stan Musial.

The Secret Race: Inside the Hidden World of the Tour de France by Tyler Hamilton and Daniel Coyle
Former Olympic gold medalist provides a look at the world of professional cycling and the doping issues surrounding the sport.

Running with the Kenyans: Passion, Adventure and the Secrets of the Fastest People on Earth by Adharanand Finn
The author moved with his wife and three children from England to Kenya to learn the secret of Kenyan runners and train for the Lewa marathon, a race across a wildlife conservancy.

You Stink!: Major League Baseball’s Terrible Teams and Pathetic Players by Eric J. Wittenberg and Michael Aubrecht
A satiric recounting of the memorable stories of defeat in America’s national pastime includes the 1889 Louisville Colonels, the 1941 and 1962 Phillies and the worst record of the modern era.

Blue Water, Green Skipper: A Memoir of Sailing Alone Across the Atlantic by Stuart Woods
Best-selling crime-fiction author participated in the 1976 Observer Singlehanded Transatlantic Race, a passage that took 45 days to complete.

Peking to Paris: Life and Love on a Short Drive Around Half the World by Dina Bennett
In May 2007, in an effort to build personal courage and patience, the author joined 127 other antique auto drivers on a race that began in Beijing and travelled across the Gobi, Siberia, Baltic States and south to Paris.

Originally published on July 26, 2013 in the Lititz Record Express.