I’m writing this as National Letter Writing Week comes to a close, which falls every year during the second full week of January. The following books are collections of correspondence between those both well-known and those of less notoriety. Letter-writing, as a general practice, has declined a fair bit in this modern age of rapid response. My hope is that these titles, and others like them, might inspire you to sit in the coming days and pen a thoughtful letter to a relative or friend, across the country or just across town.

Letters to Children from Beatrix Potter / Collected and Introduced by Judy Taylor – The current collection draws together letters written to children supposedly by characters made famous by her books. Featuring photos and illustrations as well, this collection is a welcome treat for any that’s ever been enchanted by the world’s created by Beatrix Potter.

Swimming Lessons / Claire Fuller – This work of fiction tells the story of Ingrid Coleman, who composes letters to her husband but never sends them. Instead she places each one in a book that makes up his vast library collection. Upon completing the last letter she disappears, leaving just her thoughts and words behind.

Wisdom of our Fathers: Lessons and Letters from Daughters and Sons / [collected by] Tim Russert – This touching volume is made up of the treasure trove of letters that Tim Russert received after publishing his bestselling book about his own father. Illustrating the complex ways in which fathers play a role in their children’s lives, Russert’s collection is sure to strike a chord with anyone who picks up this volume.

Voices from the Front: Letters home from America’s Military Family / Letters Collected, Edited, and with a Foreword by Frank Schaeffer – Whether from a military family or not, this powerful collection of writings from those who served in Afghanistan and Iraq will remind readers of the toll exacted on the men and women that put on our country’s uniform as they depart for distant lands.

Zora Neale Hurston: A Life in Letters / Collected and Edited by Carla Kaplan – A collection of more than five hundred letters, written to such people as Langston Hughes, Dorothy West, and many others, paints a portrait of the enigmatic woman who became one of the greatest literary figures in American history. 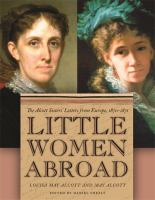 A Life in Letters / Selected and Annotated by Peter Davison – A compilation of personal letters creates an autobiography of the author of “Nineteen Eighty-Four” through his correspondence with other literary luminaries, including T.S. Eliot and Henry Miller, as well as letters to complete strangers.

The John Lennon Letters / John Lennon; Edited and with an Introduction by Hunter Davies – A lifetime of letters, collected for the first time, from the legendary musician and songwriter. John Lennon was one of the greatest songwriters the world has ever known, but it was in his correspondences that he let his personality and poetry flow unguarded. Now, gathered for the first time in book form, are his letters to family, friends, strangers, and lovers from every point in his life.

Little Women Abroad: The Alcott Sisters’ Letters from Europe, 1870-1871 / Louisa May Alcott and May Alcott; Edited by Daniel Shealy – In 1870, Louisa May Alcott and her younger sister Abby May Alcott began a fourteen-month tour of Europe. Little Women Abroad gathers a generous selection of May’s drawings along with all of the known letters written by the two Alcott sisters during their trip. More than thirty drawings are included, nearly all of them previously unpublished.