Once again, it’s back-to-school season. The Lititz Public Library has school-related books for all ages—even adults. From children going to school for the first time to those who reminisce about their classroom days, we have you covered. 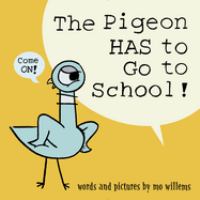 Picture Books
“The Pigeon HAS to Go to School!” by Mo Willems
The pigeon is so overwhelmed by all of the new things he’ll experience at school that he’s afraid to go… but something makes him have a complete turnaround.

“Chicken in School” by Adam Lehrhaupt
Sam the pig wants to go to school, so Zoey the chicken turns a barn into a school filled with books and crayons… but will there be a snack for Sam?

“The Secret Life of Squirrels: Back to School!” by Nancy Rose
Rosie the squirrel needs to get her classroom all set up for the first day of school. This story is filled with delightful photos of real squirrels interacting in hand-made dioramas.

“The Day You Begin” by Jacqueline Woodson
Going someplace new where you feel different can be scary, but you may find you aren’t alone in feeling alone on your first day, as two students discover in this story.

Chapter Books
“School Days According to Humphrey” by Betty G. Birney
Humphrey the classroom hamster grows confused when an unfamiliar group of students arrives on the first day of school, and he finds himself torn between his old and new classmates.

“Confessions from the Principal’s Kid” by Robin Mellom
Most of the kids at school shy away from Allie because she is the principal’s daughter, but she’s desperate to be accepted and expand her circle beyond the crowd of teachers’ kids.

“Restart” by Gordon Korman
Chase falls off a roof and forgets everything about himself… but his classmates remember him, and he dislikes most of what he learns about his old ways. Can he start over and become a better person?

“Focused” by Alyson Gerber
When Chea’s ability to concentrate at school—and after school—becomes problematic, she learns that she has ADHD, but she is determined to find a way to focus.

“Halfway Normal” by Barbara Dee
Adjusting to middle school is tough for Norah, especially after being away from school for two years to have cancer treatment. Inspired by characters from her favorite Greek myths, she’s up to facing her challenges.

For Adults
“Old in Art School: A Memoir of Starting Over” by Nell Painter (biography)
A retired history professor goes back to school to pursue a master’s degree in painting. She explores not only what it is like to be an older student, but also how harshly both art and artists can be judged.

“A Wonderful Stroke of Luck” by Ann Beattie
An influential teacher at a boarding school leaves a deep and lasting impression on many of his students. One of these students comes to question what he has been taught, especially once he crosses paths with that teacher long after graduation.

“You’ve Been Volunteered: A Class Mom Novel” by Laurie Gelman
Being a class mom has its share of demands—it’s even more difficult when juggling school politics and family drama at the same time. This class mom has much to deal with, but she handles it all with honesty and humor.

“The Gifted School” by Bruce Holsinger
When a school for gifted students opens, the competition grows fierce among the parents, who are willing to do whatever it takes to get their children enrolled in this exclusive academy.

“The Girl He Used to Know” by Tracey Garvis Graves
A couple who meet at their university chess club get torn apart but manage to cross paths again 10 years later. Will it work out for them this time?

“Normal People” by Sally Rooney
Two students with little in common who meet in high school are attracted to each other, but both keep at a distance. This cautious relationship continues into college until a crisis draws them closer.

“The Housekeeper and the Professor” by Yoko Ogawa
A math professor with a drastic case of short-term memory can remember things for only 80 minutes—unless it pertains to mathematics. From his perspective, he meets his housekeeper anew on a daily basis.