Dickensian, a recent addition to the Lititz Public Library’s DVD collection, is a dramatic reinvention of Charles Dickens’ novels, taking familiar literary characters on new journeys that sometimes intersect in the same Victorian neighborhood. Discover the events that led up to Miss Haversham’s wedding, the true sacrifices made by a young Lady Dedlock, what happens to ruthless moneylender Jacob Marley and more. Although it is not essential to know Dickens’ novels to enjoy this series, the library offers these DVD adaptations to enrich the viewing experience.

The Mystery of Edwin Drood
A haunted and restless choirmaster in a provincial cathedral town believes his salvation may be found in the arms of his prized pupil, his nephew’s young fiancé.

Bleak House
An extended legal case involving a large inheritance that promises wealth for many family members wrecks their lives over generations.

Little Dorrit
Returning to London after several years abroad, a man wants to learn more about his mother’s new seamstress, a search that leads him to the debtors’ prison and the truth about struggle and hardship.

The Old Curiosity Shop
In payment for a gambling debt, a girl and her grandfather are evicted from their curiosity shop by the evil moneylender and they wander about the country living as beggars and looking for a new home.

Hard Times
To be near her brother, a young woman accepts an offer of marriage from his boss even though she does not love him, but she soon finds herself succumbing to the attentions of an unscrupulous womanizer. 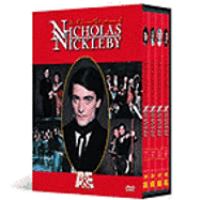 The Life and Adventures of Nicholas Nickleby
A young, compassionate man struggles to save his family and friends from the abusive exploitation of his cold-hearted uncle.

A Tale of Two Cities
A self-indulgent lawyer defends an emigrant charged with spying against England and becomes attracted to the man’s fiancé, agreeing to help her save him from the guillotine when he is captured by Revolutionaries in Paris.

Our Mutual Friend
A tale of two turbulent love affairs plays out amidst a tangled web of love, greed and secret identities.

Oliver Twist
An orphan meets a pickpocket on the streets of London and joins a household of boys who are trained to steal for their master.

David Copperfield
A boy is sent away by his stepfather after his mother dies but he manages to overcome the adversities of his youth to become a successful gentleman.

Great Expectations
In a gloomy country graveyard, a young boy encounters an escaped convict, a chance meeting that years later leads the boy to tragedy, mystery and wealth.

A Christmas Carol
A miser begins the Christmas holiday with his usual contempt, barking at his faithful clerk and cheery nephew, but when ghosts take him on an eye-opening journey revealing truths he is reluctant to face, he must undo years of ill will before it’s too late.

Dickens of London
While on tour in America in 1869, Charles Dickens recalls the moments that shaped his life, from his penniless childhood to the unprecedented success he later enjoyed on both sides of the Atlantic.