Sometimes the creations of one author can inspire many others for years to come. Such is the case with Sherlock Holmes. For those who hunger for more Holmesian stories beyond the canon, there is a variety of fiction, nonfiction, and DVDs that can be found at the Lititz Public Library, no matter what your age.

In the Company of Sherlock Holmes: Stories Inspired by the Holmes Canon edited by Laurie R. King and Leslie S. Klinger (fiction)
Doyle wrote more short stories than novels about Holmes because of his character’s intellect—he solved cases too quickly to stretch them into novels. Here are more short stories about the great detective, this time penned by current authors.

Island of the Mad by Laurie R. King (fiction)
In this series, Holmes is married to Mary Russell, another character with a strong inclination to solve mysteries. The two are obligated to find a mad lady who has gone missing, resulting in an investigation that stretches from Bedlam to Venice.

Elementary, She Read by Vicki Delany (fiction)
In a bookshop that specializes in selling Sherlock Holmes books and memorabilia, Gemma Doyle chances upon a magazine that leads to a body… which leads to an investigation… and the discovery of another body.

Conan Doyle for the Defense by Margalit Fox (nonfiction)
Upset with the outcome of a 1908 murder trial in which a man is wrongfully convicted, Arthur Conan Doyle decides to take on the role of his famous character and investigate the case himself.

The Baker Street Letters by Michael Robertson (fiction)
When a young girl’s father goes missing, she writes to Sherlock Holmes for assistance. However, it is 1996 and 221b Baker Street is now occupied by a barrister and his brother who are determined to crack the case as Holmes would have done.

Mycroft and Sherlock by Kareem Abdul-Jabbar (fiction)
Mycroft, brother of Sherlock Holmes, investigates a case that involves an orphanage, a grounded cargo ship, and the opium trade.

The Shadow of Reichenbach Falls by John R. King (fiction)
Based on the story “The Final Problem” in which Holmes faces his nemesis Moriarty, a new character is introduced, an additional witness to the legendary struggle known as Carnacki the Ghost Finder.

How Sherlock Changed the World (DVD)
The fictional character Sherlock Holmes, inspired by real-life surgeon Joseph Bell, served as an inspiration for the real world that revolutionized crime scene investigation as we know it.

Sherlock (DVD, British TV series)
In this high-action, 21st century reimagining of Sherlock Holmes, have fun spotting subtle references to stories of the canon scattered throughout.

The Search for Sherlock Holmes (DVD)
Dig deeper into what inspired Doyle to create his famous detective.

Young Sherlock Holmes (DVD)
When youthful Watson and Holmes meet at a boarding school, it doesn’t take long for them to start investigating murders together.

Dr. Bell and Mr. Doyle: The Dark Beginnings of Sherlock Holmes (DVD)
A fictional dramatization of Doyle when in medical school, assisting his legendary instructor, Joseph Bell, in solving a murder investigation. 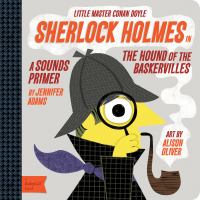 Sherlock Holmes in the Hound of the Baskervilles: A Sounds Primer by Jennifer Adams
Learn about different sounds one might hear on a spooky night. In this case, it’s with Holmes in his famous adventure about the mysterious hound.

For Older Kids
The 100-Year-Old-Secret by Tracy Barrett
A brother and sister who are the great-great-great grandchildren of Sherlock Holmes try to solve a case about a painting that he never solved.