In honor of Black History Month, we have put together a number of movies to enjoy that explore the trials and tribulations, joys and jubilations of the African-American experience. While these are just a sampling of that experience, we hope this list prompts you to seek out more stories that detail American lives in all their glories.

Do the right thing / produced, written and directed by Spike Lee – Director Spike Lee dives head-first into a maelstrom of racial and social ills, using as his springboard the hottest day of the year on one block in Brooklyn, NY. Three businesses dominate the block: a storefront radio station, where a smooth-talkin’ deejay (Samuel L. Jackson) spins the platters that matter; a convenience store owned by a Korean couple; and Sal’s Famous Pizzeria, the only white-operated business in the neighborhood.

Get out / written and directed by Jordan Peele – A young black man meets his white girlfriend’s parents at their estate, only to find out that the situation is much more sinister than it appears.

Just mercy / directed by Destin Daniel Cretton  – A powerful and thought-provoking true story follows young lawyer Bryan Stevenson and his history-making battle for justice. After graduating from Harvard, Bryan had his pick of lucrative jobs. Instead, he heads to Alabama to defend those wrongly condemned or who were not afforded proper representation, with the support of local advocate Eva Ansley. One of his first and most incendiary cases is that of Walter McMillian.

Marshall / directed by Reginald Hudlin – About a young Thurgood Marshall, the first African-American Supreme Court Justice, as he battles through one of his career-defining cases.

Maya Angelou, and still I rise / directed by Bob Hercules, Rita Coburn Whack – Examines the life and legacy of African American poet, memoirist, and civil rights worker Maya Angelou, from her upbringing in the Depression-era South to her work with Malcolm X in Ghana to the recitation of her inaugural poem for President Bill Clinton. Includes Angelou’s own words woven together with archival photographs and videos as well as interviews with Angelou’s friends and family.

I am not your negro / written by James Baldwin ; directed by Raoul Peck – Master documentary filmmaker Raoul Peck envisions the book James Baldwin never finished. The result is a radical, up-to-the-minute examination of race in America, using Baldwin’s original words and a flood of rich archival material. A journey into black history that connects the past of the Civil Rights movement to the present of #BlackLivesMatter.

Barbershop / directed by Tim Story – Calvin never wanted to take over the family business, a barbershop on the south side of Chicago. One morning he decides to sell the shop to Lester. Calvin spends the day cutting heads at the shop, and starts to understand the importance of the legacy left to him. Calvin learns to appreciate his barber friends and discovers that the place where they work is more than just a place to get a haircut. Calvin gradually changes his mind about selling the shop, but it may be too late.

Moonlight / directed by Barry Jenkins – A young black man struggles to find his place in the world while growing up in a rough neighborhood of Miami.

The color purple / directed by Steven Spielberg – The heart-wrenching story of a young black girl in the early 20th century who’s forced into a brutal marriage and separated from her sister is based on the novel by Alice Walker.

42 : the Jackie Robinson story / written and directed by Brian Helgeland – History was made in 1947, when Jackie Robinson broke the professional baseball race barrier to become the first African American MLB player of the modern era. 42 tells the life story of Robinson and his history-making signing with the Brooklyn Dodgers under the guidance of team executive Branch Rickey.

Black Panther / directed by Ryan Coogler – King T’Challa returns home to the isolated, technologically advanced African nation of Wakanda to serve as new leader. However, T’Challa soon finds that he is challenged for the throne from divisions within his own country. When two enemies conspire to destroy Wakanda, the hero known as Black Panther must join forces with C.I.A. agent Everett K. Ross and members of the Wakandan Special Forces, to prevent Wakanda from being drawn into a world war. 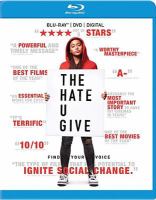 The hate U give / directed by George Tillman, Jr – Starr Carter navigates the perilous waters between her poor, black neighborhood and her prestigious, mainly white private school. This all changes when she finds herself in the middle of racial activism after her best friend is shot by police officers, and she’s forced to make a decision. Allow the media to skewer her friend to protect the status quo, or stand up and tell the truth in memory of Khalil?

How Stella got her groove back / directed by Jeffrey Jur – Stella and Delilah have been friends through good times and bad. Stella, however, has been so busy with building a life, she’s forgotten how to live. Delilah has plans to change that…

The hurricane / directed by Roger Deakins – Rubin “Hurricane” Carter, in the prime of his boxing career, finds himself wrongfully convicted of murder. Sentenced to life in prison, Carter’s published memoir, The Sixteenth Round, inspires a teenager from Brooklyn and three Canadian activists who believe in the truth, to join forces with Carter to prove his innocence.

If Beale street could talk / written for the screen and directed by Barry Jenkins – A timeless love story set in early 1970s Harlem involving newly engaged nineteen-year-old Tish and her fiance Fonny who have a beautiful future ahead. But their plans are derailed when Fonny is arrested for a crime he did not commit. Now the pair and their families must fight for justice in the name of love and the promise of the American dream. Based on the novel by James Baldwin.

In the heat of the night / directed by Norman Jewison – A black homicide expert is asked to help solve the murder of a wealthy businessman in a small town.

A raisin in the sun / directed by Daniel Petrie – Film of the award-winning play about a struggling black family living on Chicago’s South Side and the impact of an unexpected insurance bequest. Each family member sees the bequest as the means of realizing dreams and of escape from grinding frustrations.

Fences / directed by Denzel Washington – In 1950s Pittsburgh, a Black garbage collector named Troy Maxson–bitter that baseball’s color barrier was only broken after his own heyday in the Negro Leagues–is prone to taking out his frustrations on his loved ones.

Soul food / written and directed by George Tillman, Jr – Sunday dinner at Mother Joe’s is a mouth-watering, 40-year tradition. As seen through the eyes of her grandson Ahmad, love and laughs are always on the menu, despite the usual rivalries simmering between his mom Maxine and her sisters Teri and Bird. But when serious bickering starts to tear the family apart, the good times suddenly stop. Now it’s up to Ahmad to get everyone back together and teach them the true meaning of soul food.