Looking for a fast moving story? These page-turners come highly recommended. They’re available to borrow from the Lititz Public Library.

Con Ed by Matthew Klein
To save his son, an ex-con accepts a proposal from a Las Vegas casino owner’s stunning wife who has a plan for a scam.

Runner by Thomas Perry
After years of a happy, quiet life as the wife of a surgeon, a woman who once helped people in trouble find new identities is drawn back into her dangerous former profession when a bomb goes off in the middle of a hospital.

On Borrowed Time by David Rosenfelt
On a journey with his girlfriend a man blacks out after a car accident and discovers when he awakes that she’s not only missing, but apparently never existed.

Sworn to Silence by Linda Castillo
Recently appointed Chief of Police in her former hometown, a woman who grew up in an Amish community before abandoning their way of life is faced with violent serial killer.

Bleed for Me by Michael Robotham
A psychologist attempts to help an abused girl explore her memories in attempt to aid a criminal investigation that involves sexual predators and a blackmailer. 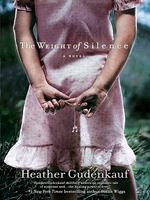 The Weight of Silence by Heather Gudenkauf
When their seven-year-old daughter goes missing, a mother evaluates her decision to stay in a loveless marriage that caused her child to withdraw into silence, while the father confronts an uncomfortable aspect of his own personality.

The Last Camellia by Sarah Jio
A garden designer and her husband are intrigued by the story of a rare camellia orchid secreted away on an English country estate at the beginning of the Second World War.

The Host by Stephenie Meyer
A member of a species that takes over the minds of human bodies, the Wanderer is unable to disregard his host’s love for a man in hiding.

Still Missing by Chevy Stevens
A young woman relates the story of her brutal kidnapping to her psychiatrist, sharing experiences of her captivity and how she is coping since her return.

Chose the Wrong Guy, Gave Him the Wrong Finger by Beth Harbison
Running away with her fiancé’s brother after he convinces her that the man she was about to marry has been unfaithful, a young woman takes a job at a bridal shop when the ensuing relationship also fails, leading to an explosive confrontation seventeen years later.

The Silent Wife by A.S.A. Harrison
After a less than perfect twenty-eight-year marriage, a Chicago psychotherapist realizes leaving her troubled relationship with her husband could lead to the disintegration of her affluent lifestyle.

Headhunters by Jo Nesbø
In attempt to mitigate the guilt he feels over missteps in his relationship with his art dealer wife, a corporate headhunter decides to recommend one of her gallery’s clients for a high-profile executive position.

Me Before You by Jojo Moyes
A young woman takes a job working for man who once travelled the world making big deals but who is now moody, acerbic and wheelchair bound after a motorcycle accident.

Magic Hour by Kristin Hannah
After reluctantly giving up her California practice working with troubled children, a young woman draws on all her skills to deal with a young mute girl found abandoned and terrified in her Pacific Northwest hometown.

Originally published on October 4, 2013 in the Lititz Record Express.