Don’t settle for a routine and ordinary week when adventure awaits in a travel book from the Lititz Public Library.

Dories, Ho! by Matt and Karen Smith
A humorous and irreverent account describes the author’s trip with fourteen friends down the Colorado River and through the Grand Canyon in wooden boats.

I’ll Push You: A Journey of 500 Miles, Two Best Friends and One Wheelchair by Patrick Gray
When one was diagnosed with a neuromuscular disease that robbed him of the use of his arms and legs, two lifelong friends refused to let physical limitations control what is possible and they traveled the Camino de Santiago, a 500-mile trek through Spain.

Four Seasons in a Day: Travel, Transitions and Letting Go of the Place We Call Home by Deborah L. Jacobs
With a plan to carve out a new life and embrace the unexpected, the author shares the misadventures she and her husband encountered as they traveled across France, struggling with the language and living like locals.

Ruthless River: Love and Survival by Raft on the Amazon’s Relentless Madre de Dios by Holly FitzGerald
When their plane crashed in the jungles of Peru, the newly married author and her husband survived aboard a makeshift raft as they made their way down the Amazon River to civilization.

Walking to Listen: 4,000 Miles across America, One Story at a Time by Andrew Forsthoefel
Newly graduated from college but unsure how to begin his adult life, the author decided to undertake a cross-country quest for guidance, asking everyone he met for advice and collecting thousands of stories. 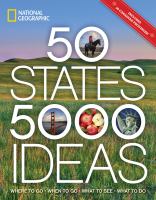 50 State, 5,000 Ideas: Where to Go, When to Go, What to See, What to Do from National Geographic
Discover the best travel experiences in every state with entries that provide detailed information for planning trips as well as fascinating facts about each state.

The Worrier’s Guide to the End of the World: Love, Loss and Other Catastrophes through Italy, India and Beyond by Torre DeRoche
Lively memoir chronicles the friendship between two women who set off on an exhilarating and harrowing pilgrimage through India, walking 240 miles in Gandhi’s footsteps as they followed his Salt March to the sea.

Atlas Obscura: An Explorer’s Guide to the World’s Hidden Wonders by Joshua Foer
Discover over 700 of the strangest and most curious places in the world, such as the glowworm caves of New Zealand, stepwells in India, Baby Jumping Festival in Spain and Turkmenistan’s forty-year hole of fire.

Sixty Degrees North: Around the World in Search of Home by Malachy Tallack
The author explored the landscapes of the sixtieth parallel, the border between the northern and southern worlds, and she highlights themes of wilderness and community in the recollections of her travels.

No Baggage: A Minimalist Tale of Love and Wandering by Clara Bensen
Barely knowing each other’s last names, a woman joined an energetic university professor she met online for a risky travel experiment spanning eight countries in three weeks with no hotel reservations, no plans and no baggage.

Abroad at Home: The 600 Best International Travel Experiences in North America from National Geographic
A potpourri of international experiences can be found in the US and Canada through visits to villages, neighborhoods and regions that explore North America’s global diversity.