Read accounts of people who took part in the monumental events that trace the history of the Second World War. These books are available to borrow from the Lititz Public Library.

Five Came Back: A Story of Hollywood and the Second World War by Mark Harris
FDR and the military turned to Hollywood and five legendary film directors to educate and inspire American soldiers and civilians.

A Cool and Lonely Courage: The Untold Story of Sister Spies in Occupied France by Susan Ottaway
London-born sisters worked undercover in Nazi-occupied France, sent crucial intelligence to the Allies and faced imprisonment and torture.

Chasing Gold: The Incredible Story of How the Nazis Stole Europe’s Bullion by George M. Taber
As the Nazi war machine moved across Europe, governments scrambled to move their gold reserves to nations not under threat. 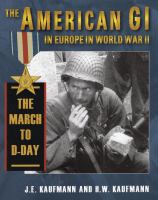 The American GI in Europe in World War II by J.E. Kauffman and H.W. Kauffman
Veterans’ testimonies are woven together to capture the experiences of soldiers from Pearl Harbor to the preparations for D-Day.

Kaiten: Japan’s Secret Manned Suicide Submarine and the First American Ship It Sank in WWII by Michael Mair and Joy Waldron
In November 1944, an American tanker anchored in the Pacific Ocean was the first casualty of a secret manned suicide-submarine.

Conversations with Major Dick Winters: Life Lessons from the Commander of the Band of Brothers by Colonel Cole C. Kingseed
Addressing the experiences that made Winters such an effective leader, his good friend shares the reluctant hero’s formative influences and last years.

Operation Paperclip: The Secret Intelligence Program That Brought Nazi Scientists to America by Annie Jacobsen
The U.S. government undertook a covert operation to recruit Nazi scientists in the years following WWII in an effort to prevent their knowledge and expertise from falling into the hands of the Soviet Union.

Salt Mines and Castles: The Discovery and Restitution of Looted European Art by Thomas Carr Howe, Jr.
A first-hand account of the work of the Monument, Fine Arts and Archives Section of the U.S. Forces describes their quest to identify and protect European cultural sites, monuments and buildings from Allied bombing.

The Arsenal of Democracy: FDR, Detroit, and an Epic Quest to Arm an America at War by A.J. Baime
Henry Ford and his son Edsel answered the call to arms during WWII, claiming Ford Motor Company would erect a plant that could yield a “bomber an hour.”

50 Children: One Ordinary American Couple’s Extraordinary Rescue Mission into the Heart of Nazi Germany by Steven Pressman
In 1939, facing rigid immigration laws that made it almost impossible for European Jews to seek safe haven in the U.S., a couple from Philadelphia rescued the single largest group of unaccompanied refugee children.

Killing Patton: The Strange Death of World War II’s Most Audacious General by Bill O’Reilly and Martin Dugard
Patton died under mysterious circumstances in the months following the end of WWII, sparking suspicion that his death was not an accident.

Let Me Tell You a Story: A Memoir of a Wartime Childhood by Renata Calverley
In 1942, the six-year-old author and her family were taken to the Polish Ghetto. One day her parents failed to return from their factory shifts and an unlikely twist of fate saved her life.

A World Elsewhere: An American Woman in Wartime Germany by Sigrid MacRae
While visiting Paris in 1927, a wealthy American woman falls in love with a charming, German aristocrat and following his death on the Russian front she must fend for herself.