Why not take time to reflect on the founding of our country, the Revolutionary War and all matters American? There is much to celebrate and learn on the Fourth of July, and the Lititz Public Library is a fantastic place to start.

“Big George: How a Shy Boy Became President Washington” by Anne Rockwell
Most are used to thinking of George Washington as president, not as a shy boy who loved reading and exploring the woods. Introduce your kids to young Washington as he grows up, and see what leads to his becoming our first president.

“America: A Patriotic Primer” by Lynne Cheney
Learn the alphabet the patriotic way, filled with many bite-sized facts about American history.

“Henry Knox: Bookseller, Soldier, Patriot” by Anita Silvey
Difficulties can be used to one’s advantage, as displayed through Henry Knox and his mission to bring heavy artillery from Fort Ticonderoga to Boston during a harsh winter.

For young adults
“Hamilton and Peggy! A Revolutionary Friendship” by L. M. Elliott
Alexander Hamilton loves Eliza Schuyler and begs her younger sister, Peggy, for help in this novel of love and adventure, inspired by the musical, “Hamilton.”

“The British Are Coming: The War for America, Lexington to Princeton, 1775-1777” by Rick Atkinson
This engaging narrative from a Pulitzer Prize winning author follows the beginning of the Revolutionary War, from the perspectives of both Americans and the British.

“The First Conspiracy: The Secret Plot to Kill George Washington” by Brad Meltzer and Josh Mensch
Some of Washington’s bodyguards were anything but safe or trustworthy—they were part of a conspiracy to have him killed.

“In the Hurricane’s Eye: The Genius of George Washington and the Victory at Yorktown” by Nathaniel Philbrick
In his latest book, Philbrick focuses on the climax of the American Revolution and how the pivotal Battle of the Chesapeake, an engagement in which Washington was reliant on the cooperation of the French, tied in with the triumph at Yorktown.

“American Dialogue: The Founders and Us” by Joseph J. Ellis
What would the founding fathers say regarding some of today’s controversial issues? Ellis focuses on four historical figures and four points of debate in this thoughtful examination. 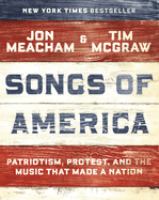 “Songs of America: Patriotism, Protest, and the Music That Made a Nation” by Jon Meacham and Tim McGraw
From the 1700s to the popular music of today, music has left a deep mark on American history through reacting to our changing times and serving as a source of inspiration.

“Of Arms and Artists: The American Revolution Through Painters’ Eyes” by Paul Staiti
How we picture the Revolutionary War is largely inspired by art. Explore the works and lives of five American artists, two of whom served in the Continental Army and painted history as it unfolded.

“Speaking American: How Y’all, Youse, and You Guys Talk: A Visual Guide” by Josh Katz
For lovers of language and fun trivia, here’s an entertaining exploration of American dialect and how it varies from region to region, covering everything from sub and hoagie to kitty-corner and catty-corner. 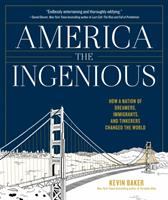 “America the Ingenious: How a Nation of Dreamers, Immigrants, and Tinkerers Changed the World” by Kevin Baker
From the simplicity of safety pins to the complexity of the MRI, America is the birthplace of an overwhelming amount of inventions. Discover some facts you never knew in this celebration of accomplishments and ethnic diversity.

“Washington’s General: Nathanael Greene and the Triumph of the American Revolution” by Terry Golway
Nathanael Greene was a key hero in winning the Revolution who defied his Quaker upbringing by joining the military, rising through the ranks and becoming formidable in the eyes of the British with his unique style of warfare.