This year marks Smokey Bear’s 75th birthday—and his zeal for preventing forest fires is still as strong as ever. Why not celebrate and get immersed in some bear books and movies from the Lititz Public Library? 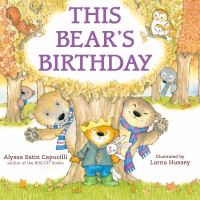 “This Bear’s Birthday” by Alyssa Satin Capucilli (fiction)
It’s Bear’s birthday, and since he’s a big bear, he can now do everything by himself with no help at all… or so he thinks.

“Teddy: The Remarkable Tale of a President, a Cartoonist, a Toymaker, and a Bear” by James Sage (fiction)
Here is a slightly tweaked version of the origin of the teddy bear, in which a toy phenomenon is sparked by Theodore Roosevelt’s refusal to shoot a bear, a political cartoonist’s hasty work, and the skillful hands of a busy toymaker.

“The New LiBEARian” by Alison Donald (fiction)
It’s story time at the library, but the familiar librarian is missing and seems to have been replaced by a bear. The bigger surprise is where the bear came from.

“Backyard Bears: Conservation, Habitat Changes, and the Rise of Urban Life” by Amy Cherrix (nonfiction)
Learn about bears and other animals from around the world (but mostly bears), and what conservationists do to help them.

“Park Scientists: Gila Monsters, Geysers, and Grizzly Bears in America’s Own Backyard” by Mary Kay Carson (nonfiction)
National parks are not only treasures, but they offer rich opportunities for research. Find out what it’s like to research some of our nation’s natural wonders, including grizzlies, salamanders, and fireflies.

“I Survived the Attack of the Grizzlies, 1967” by Lauren Tarshis (fiction)
From the popular “I Survived” series comes a fictionalized account of an eleven-year-old girl’s encounter with a grizzly bear in Montana.

“Smokey Bear: The Cub Who Left His Pawprints on History” by Karen Signell (fiction)
The real-life Smokey Bear was a cub who was rescued by a game warden from a forest fire in New Mexico. Here’s the imaginative novelization of Smokey’s life, complete with talking animals.

“Smiling Bears: A Zookeeper Explores the Behavior and Emotional Life of Bears” by Else Poulsen (nonfiction)
There is no denying that bears have personality, and Poulsen, who has spent years helping bears in rehabilitation, can attest to that. Learn about her experiences with the healing stories of different species of bears.

“Panda Love: The Secret Lives of Pandas” by Ami Vitale (nonfiction)
Pandas—adorable, roly-poly, rare, and difficult to breed. In this photograph-rich book, take a close look at the baby pandas of Lizipin Nature Reserve and The China Conservation and Research Center for the Giant Panda, where pandas are bred, raised by people dressed in panda suits, and released into the wild.

“Village of the Ghost Bears” by Stan Jones (fiction)
A complex investigation in Alaska involves a mysterious death, a plane crash, and arson, all of which point a state trooper toward some polar bear poachers.

“Bearskin” by James A. McLaughlin (fiction)
Desperate to escape a dangerous past, a worker at a forest preserve in Appalachia thinks he has finally attained a peaceful existence until the dead bears start appearing, leading him on a struggle to track down the poachers.

“Black Bear: Seasons in the Wild” by Tom Anderson (nonfiction)
Spend a year with a black bear, get some popular myths about bears debunked, and learn about some real-life bear encounters—complete with many photographs.

“The Bear” (DVD)
Set in 1885, a grizzly bear and cub fight for survival. Their primary threat: man.

“Grizzly Man” (DVD)
This documentary follows the experiences of Timothy Treadwell, who spent 13 summers living in close contact with grizzly bears in Alaska—work that proved fatal.

“Jeremiah Johnson” (DVD)
Longing to be alone, Jeremiah Johnson decides to escape to the wilderness and become a mountain man, an endeavor that almost costs him his life. He even has a tense encounter with a grizzly.