War-blasted soldiers, sailors and marines spearhead the stories in these thrilling adventure novels. Many of these are no longer held by (but are available to borrow through interlibrary loan at) the Lititz Public Library.

Death and Honor by W.E.B. Griffin and William E. Butterworth IV
Recruited by Wild Bill Donovan to set up an OSS front in 1943 Argentina, a Marine pilot monitors two German operations including a concentration camp smuggling ring and a Nazi protection group.

Tiger’s Claw by Dale Brown
After the crash of a reconnaissance plane hit by a new type of weapon, the Chinese take the offensive, launching a preemptive strike on a small American fleet that ignites a battle for the Pacific.

Dead Zero by Stephen Hunter
A Marine Corps master sniper travels to remote deserts and caves in Afghanistan to track down a renegade Marine using extreme measures to complete a mission.

A Matter of Honor by William C. Hammond
During the American Revolution, a Massachusetts teenager ships out with John Paul Jones to avenge the flogging death of his impressed brother at the hands of a Royal Navy officer.

White Flag Down by Joel N. Ross
Stranded in Switzerland, an Army Air Force pilot strikes an unlikely alliance with a Russian officer and a Swiss journalist in an effort to recover top secret photographs.

Torpedo by Jeff Edwards
U.S. Navy destroyers and frigates are called into action when a biological warfare attack in Washington D.C. threatens to draw the world into war.

An Approaching Enemy by Jay Worrall
Isolated after a storm while patrolling the Mediterranean with Admiral Horatio Nelson’s fleet, the British frigate Louisa accidently learns the location of the enemy fleet and sails into one of the great naval battles of history.

Seas of Crisis by Joe Buff
Learning that the Russians are providing weapons technology to Axis forces, a nuclear submarine commander infiltrates a Russian military installation in an effort to launch a strike that will force Russia to ally with the U.S. 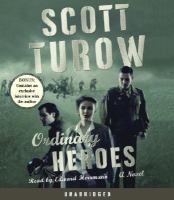 Ordinary Heroes by Scott Turow
A man plunges into the mystery of his family’s secret history when he discovers his deceased father’s wartime letters to his former fiancée, revealing his court-martial and imprisonment during World War II.

Pride Runs Deep by R. Cameron Cooke
A year after the attack on Pearl Harbor a new commander leads the USS Mackerel on missions against the Japanese in the Pacific.

Glory in the Name by James L. Nelson
Shortly after the fall of Ft. Sumter, a US naval lieutenant resigns his commission to become the captain of a steam-powered tugboat converted into a Confederate gun boat.

Originally published on March 15, 2013 in the Lititz Record Express.